Laryngomalacia (literally, "soft larynx") is a very common condition of infancy, in which the soft, immature cartilage of the upper larynx collapses inward during inhalation, causing airway obstruction. It can also be seen in older patients, especially those with neuromuscular conditions resulting in weakness of the muscles of the throat. However, the infantile form is much more common. 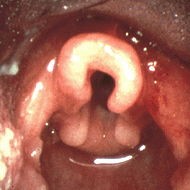 In infantile laryngomalacia, the supraglottic larynx (the part above the vocal cords) is tightly curled, with a short band holding the cartilage shield in the front (the epiglottis) tightly to the mobile cartilage in the back of the larynx (the arytenoids). These bands are known as the aryepiglottic folds; they create the movements that open and closes the vocal cords for phonation. The shortened aryepiglottic folds cause the epiglottis to be furled on itself. This is the well known "omega shaped" epiglottis in laryngomalacia.

Laryngomalacia results in partial airway obstruction, most commonly causing a characteristic high-pitched squeaking noise on inhalation (inspiratory stridor). Some infants have feeding difficulties related to this problem. Rarely, children will have significant life threatening airway obstruction. The vast majority, however, will only have stridor without other more serious symptoms.

The conventional wisdom about laryngomalacia is that the noise is more pronounced when the patient is on his or her back (with gravity making the epiglottis fall backwards). This, however, is a more common finding in older patients rather than in infants.

Although laryngomalacia is not associated with a specific gene, there is evidence that some cases may be inherited.

Laryngomalacia becomes symptomatic after the first few weeks of life, and may get louder over the first year, as the child moves air more vigorously.

Time is the only treatment necessary in more than 99% of infant cases. In other cases, surgery may be necessary. Most commonly, this involves cutting the aryepiglottic folds to let the supraglottic airway spring open. Treatment of gastroesophageal reflux disease can also help in the treatment of laryngomalacia, since gastric contents can cause the back part of the larynx to swell and collapse even further into the airway. In some cases, a temporary tracheostomy may be necessary.