Benign paroxysmal positional vertigo (BPPV) causes short episodes of vertigo (intense dizziness) when you move your head in certain directions. It it thought to be caused by tiny fragments of debris in the inner ear labyrinth. In many cases the condition clears away on its own after several weeks. A simple treatment of moving the head into various positions over a few minutes can cure the condition in many cases. This treatment uses gravity to move the debris away from where it is causing problems.

What is benign paroxysmal positional vertigo?

BPPV is a condition of the inner ear. It is a common cause of vertigo, especially in older people.

Benign means that it is due neither to a cancerous nor a serious cause. (The symptoms of BPPV may be unpleasant but the underlying cause is not serious.) Paroxysmal means recurring sudden episodes of symptoms.
Positional means that the symptoms are triggered by certain positions. In the case of BPPV, it is certain positions of the head that trigger symptoms.
Vertigo is dizziness with a spinning sensation. If you have vertigo you feel as if the world is spinning around you, and you feel very unsteady. Often you will also feel sick, and may vomit.

The inner ear includes the cochlea and semicircular canals. These are small shell-like structures in which there is a system of narrow fluid-filled channels called the labyrinth. The semicircular canals sense movement of your head and help to control balance and posture. The cochlea is concerned with hearing. 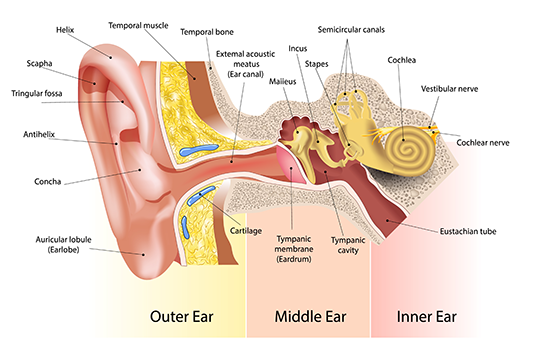 There are three semicircular canals (anterior, lateral and posterior). These are roughly at right angles to each other and sense movement in different directions - left-right, forward-back, and up-down head movements. The three semicircular canals are connected to a larger fluid-filled chamber called the vestibule, which in turn is connected to the fluid-filled canal in the cochlea.

Head movements are sensed because when you move your head, the fluid in the labyrinth within the semicircular canals moves too. The movement of the fluid moves tiny fine hairs that are on the inside lining of the labyrinth.

When the hairs move, this triggers nerve messages to be sent to the brain via a nerve called the vestibular nerve. This gives the brain information about the movement and position of your head, even when your eyes are closed.

Looking with your eyes, and nerve messages from the joints and muscles of the body, also help to tell your brain about your position and posture. However, a properly working labyrinth in each ear is needed for a good sense of posture and balance.

It is thought that BPPV is caused by one or more tiny solid fragments (or debris) that float about in the fluid of the labyrinth. The fragments are made up of calcium carbonate crystals which are thought to have broken off from the inside lining of the vestibule part of the labyrinth. These tiny fragments are called otoconia. These cause no problems if the fragment remains in the vestibule. Problems can occur if a fragment gets into one of the semicircular canals.

It is not clear why these solid fragments (otoconia) form or drop off from the inside lining of the labyrinth. Most cases of BPPV occur in people over the age of 40. Therefore, it may be an age-related thing. BPPV is one of the most common causes of vertigo in older people. However, some younger people develop BPPV following an injury to the ear, or following a previous infection in the inner ear. Sometimes it occurs in younger people for no apparent reason. Women are affected about twice as often as men.

What are the symptoms of benign paroxysmal positional vertigo?

The main symptom is vertigo. The vertigo lasts just a short time - typically just for 10-20 seconds and usually no longer than a minute. It then goes away completely. The vertigo is usually triggered by a change in head position. For example, getting out of bed and rolling over in bed are two of the most common movements that trigger a short episode of vertigo. Sometimes just looking up triggers an episode of vertigo.

With each episode of vertigo you may feel sick (nauseated) but it is not common to vomit. The nausea may last an hour or so even though the vertigo lasts just seconds. Between episodes of BPPV you feel well. Many people who develop BPPV realise which head movements trigger their symptoms and so instinctively avoid doing those movements. In most cases, the symptoms clear away within several weeks or months. The fragments of debris may dissolve or float out from the posterior semicircular canal and lodge in the vestibule where they cause no symptoms. However, after the symptoms have gone, some people have recurrences of symptoms months or years later. In some cases, symptoms persist for years.

Do I need any tests?

The symptoms of BPPV are quite characteristic and so a doctor may well suspect that you have this condition by your symptoms. To confirm the diagnosis your doctor may do a test called the Dix-Hallpike manoeuvre. This will involve your sitting on a doctor's couch. The doctor will then ask you to lie back and move your head in certain directions. These set movements in people with BPPV will usually trigger an episode of vertigo.

What is the treatment for benign paroxysmal positional vertigo?

This simple cure may be tried by your doctor. This often works if you have fragments of debris (otoconia) at the bottom of your posterior semicircular canal (the common situation). This is done by a series of four movements of the head. After each movement, the head is held in the same place for 30 seconds or so. The movements of the head basically cause the posterior semicircular canal to rotate around in such a way that gravity moves the otoconia fragments out form the posterior canal and into the vestibule where they then settle and cause no symptoms.

Following a successful Epley manoeuvre, the following are commonly advised. This is to allow the otoconia to settle in their new situation in the vestibule, and to reduce the risk of their falling back into the posterior semicircular canal: Do not lie flat for 48 hours. During this time sleep sitting in a chair. Do not lie on the affected side for one week. Ideally, try to avoid bending over (such as to tie shoelaces) for a week.

Some studies report that the Epley manoeuvre is successful in stopping symptoms in about 8 in 10 cases with just one treatment. If the first treatment does not work, there is still a good chance that it will work in a repeat treatment session a week or so later. If successful, the Epley manoeuvre is one of the few procedures that can be done in a doctor's surgery in a few minutes and that can dramatically cure a patient of symptoms! If symptoms return at a later date, the manoeuvre can be repeated.

If the Epley manoeuvre or Brandt-Daroff exercises are not successful, or not done, you can still remain optimistic. BPPV is a condition that often goes away on its own after several weeks or months without any treatment. One study said the condition had resolved in many people with BPPV in an average of 10 weeks. The otoconia are thought either to dissolve or move to a place in the labyrinth where they cause no symptoms.

Surgery is rarely needed, as in most cases the condition either improves by itself or can be cured by the Epley manoeuvre. Occasionally, symptoms persist for months or years and cannot be eased. An operation of the inner ear to take out the function of the posterior semicircular canal may then be an option. An ear specialist will advise.

How do I keep safe while I have benign paroxysmal positional vertigo?

You should stop driving if you get sudden, unexpected and disabling attacks of dizziness.

You should inform your employer if dizziness could pose a risk to yourself or others in your job. For example, if you use ladders, operate heavy machinery, or drive.
To avoid falls around the home, get out of bed slowly and avoid jobs around the house that involve looking upwards.

Benign positional vertigo is caused by abnormal deposits of crystals collecting in one of the fluid-filled balance canals of the inner ear. These exercises are designed to break up this material and unblock the canal. The exercises should be performed 3 times daily if possible. In the initial stages it is permissible to take an anti-sickness medication if nausea is a problem. The symptoms of dizziness need to be reproduced by the exercises if any benefit is to occur. If the exercises are done regularly, the symptoms should resolve over a period of several days in most cases. 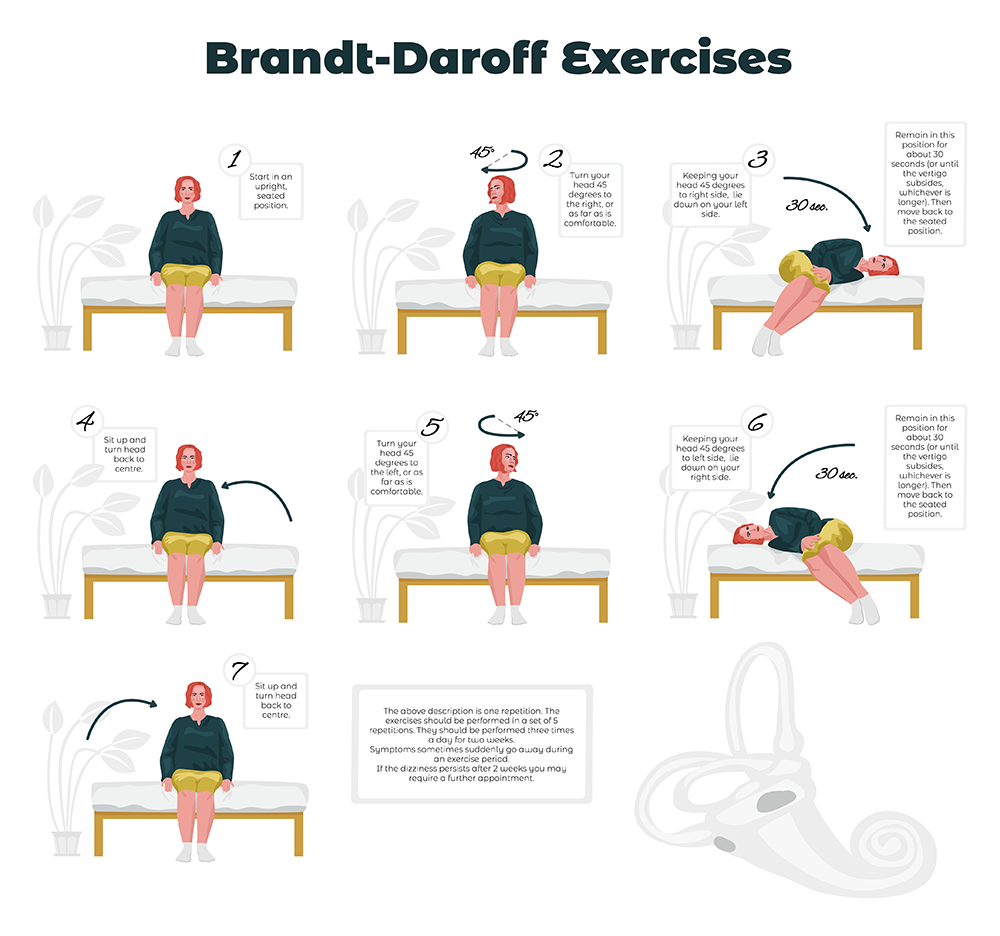 Continue as above for 10 minutes (5 or more repetitions to each side).

Please contact my office if you have any queries at all.